I held off on putting out a post yesterday because I knew what was coming up last night: Spartan: Ultimate Team Challenge. Yeah, that’s right, there’s a new way to get your Spartan Race on and it’s on prime time TV. The show is on NBC, and it appears it’s going to be in the Monday 10:00 PM (ET) timeslot for the summer.

Team American Dream pushing over the final obstacle during the premier of Spartan: Ultimate Team Challenge.

Spartan Race has put together some teams of Spartan athletes with a professional racer or other elite athlete as captain. Last night, for example, we saw Isaiah Vidal and Rose Wetzel as captains for their teams. The course itself is around a mile long, and is pretty obstacle dense. And here’s the cool thing: all the obstacles have been designed to be team-specific. Even Spartan mainstays like the Spear Throw have a team aspect to them. The target is attached to a rope which teams have to pull to get it closer, while one team member tries to hit the target.

The competition works like this: each night, there will be two preliminary heats of three teams apiece. The top team from each heat, plus the runner-up with the best time, will move on to that night’s final heat. That winner will move on to a spot in the finale, which I assume will have a similar format.

How was the show’s production? 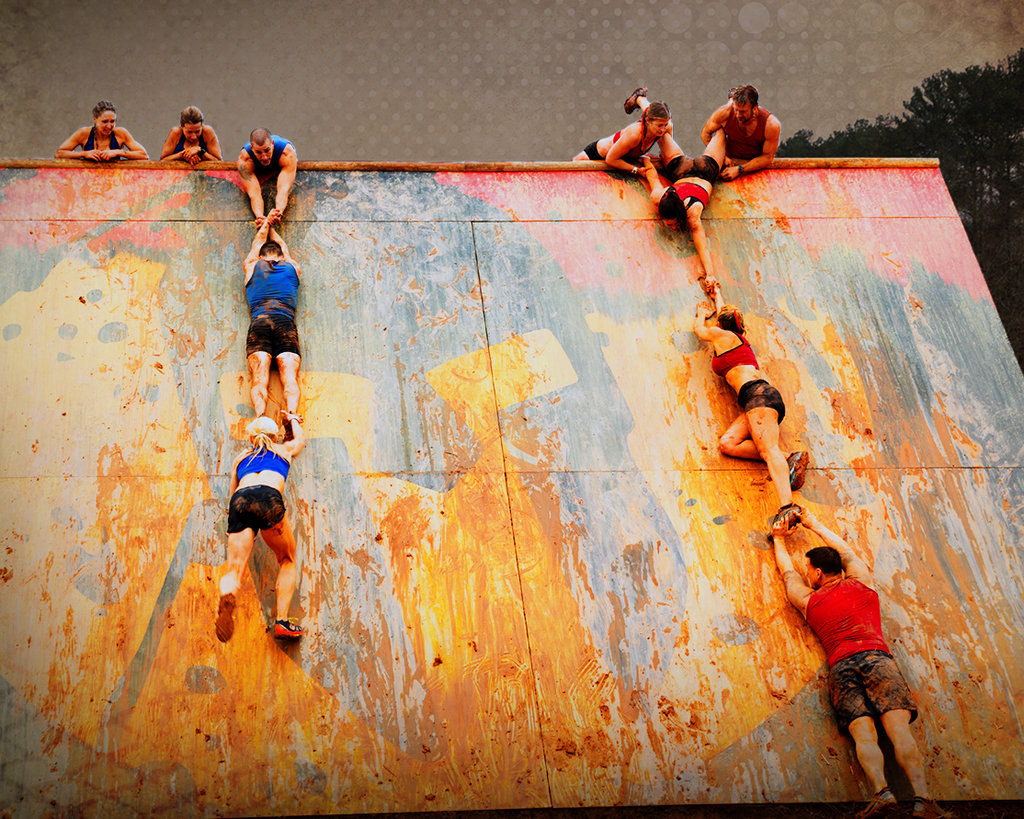 The obstacles on the show were designed to be conquered as a team, not as a bunch of individuals. Made for great drama.

The show was mixed with great stories about some of the racers – with the concentration not on the pros/elite racers, but rather the team members themselves who come from all walks of life.  And some of the stories were amazing, as you can expect from the sort of people one tends to meet at a Spartan Race.  One team, called the “American Dream” team, was made up of first- and second-generation immigrants to the US, for example. Another team, “Ruby’s Race,” was united behind one member’s drive to support his special needs daughter and call attention to the plight of kids in her situation. The uniting factor, of course, was that all of them had used Spartan Race to improve their lives and the lives of those around them in some way.

Spartan: Ultimate Team Challenge did not shy away from showing competitors having issues with the course. Some of the issues were lack of swimming skill, fear of submersion, or cold water (I can relate on that last one…). But they made sure to highlight those athletes overcoming those fears, which I thought was really awesome.

There was plenty of race drama on the show. As happens frequently in obstacle races, each team has their strengths and weaknesses. In last night’s final, for example, there was one team that was out to a huge lead only to be reeled in as they reached obstacles they had more trouble with, etc. I won’t spoil the finish for you, but suffice to say it was pretty great.

How are the announcers?

The announcers, Dhani Jones and Kyle Martino, were totally into this competition, too. A lot of the time you get announcers for shows like this who are obviously just filling time till their sport’s season starts. But in this case, (IMHO) much like Matt Iseman and Akbar Gbaja-Biamila on American Ninja Warrior, they got some good guys. Dhani Jones used to do a Travel Channel show called Dhani Tackles the Globe where he’d go to various countries to learn to play their sports at a high level, so trying new stuff is old hat to this guy. And I actually worked with Kyle Martino when he was playing midfield for the Columbus Crew and I was on their website staff, he’s a great guy who is always enthusiastic. Evan Dollard, also an American Ninja Warrior competitor (as well as a competitor on American Gladiators), is the course reporter. He’s actually done some OCR races and knows what he’s talking about with this stuff.  NBC and Spartan seem to have gone out of their way to get great commentary here. I’m very pleased.

Why you should watch Spartan: Ultimate Team Challenge:

Sometimes, we get so wrapped up in the doing of a Spartan Race, or whatever race we’re training for, that we lose sight of why we race. I think it’s important to step back once in awhile and see other folks’ stories. Sharing in the emotion and reasons that bring people to our sport is just as important as the athletic side of things. One of the big reasons to do OCR is the community. Even if that community extends outside of people we know personally, we’re still all part of a big OCR family and there’s a lot of power there.

And witnessing the community aspect is a big part of Spartan: Ultimate Team Challenge, precisely because of the team nature of the show. These folks are working together and working hard. A weak link really shows up at times (you’ll see what I mean if you watch) when you’d least want it to do so. And, unlike many reality shows which tend to mock weak links, Spartan shows the weak links as something to improve upon.

Yes, this is a reality show. But there’s no “voting off the island” or any ridiculous stuff like that. This is an objective competition, without a doubt, and there’s no room for silly crap like we usually see on such shows.

At the very least, it’s a great sports competition to watch, one that most of us can share in appreciation. At its absolute best, it’s a place for OCR folks to share in the triumphs and failures of their fellow athletes. And I know that most OCR folks are about doing rather than watching. But this show really does a great job of putting you into the race.

Caveat: okay, this show is on pretty late. I stayed up to watch it last night because I was pretty excited to do so. But I’m usually in bed a half hour before this even comes on, so I think I’ll be doing it on Hulu going forward. You can watch full episodes on the NBC website as well.

And make sure you check out Obstacle Racing Media’s report on the show as well – Matt B. Davis was there for the taping and knows what when down!

Did you watch? What did you think? Share in our message board!